Prevalence and Distribution of Odontogenic Cysts and Tumors in North Indian Population: A Database Study with Systematic Review

Aim and Objective: The aim of this study was to determine the prevalence of odontogenic cysts and tumors over a time period of 5 years.

Materials and Methods: Data for this analysis was attained from the reports of patients diagnosed with odontogenic cysts and tumors. Their prevalence and distribution according to age, gender, site and histopathologic types were noted and statistically analyzed.

Results: Among 893 patients visiting the department between years 2014-18, 33 patients presented with odontogenic cysts and 56 patients presented with odontogenic tumors. The prevalent age group was seen ranging from 19 to 40 years for both cysts and tumors. While the cyst was more commonly seen in males, tumors were seen in females. Overall prevalence of cyst was recorded as 3.6% and tumors as 6.2%.

Conclusion: The current study provides the relative distribution of different odontogenic cysts and tumors reported at our institution. Variability in the data with previous studies can be attributed to the diverse demographic factors. Thus, these findings can help us in better understanding of such lesions and ameliorate the diagnosis of odontogenic cysts and tumors.

Odontogenic cysts and tumors comprise an unusually sundry group of lesions. All these lesions originate by an aberration in the normal pattern of odontogenesis and thereby reflecting the complex development of oro-dental structures. Few lesions are not totally neoplastic but resultant of any disturbance/alteration in the normal development of tooth. Lesions such as cysts are also tumors only in the broadest sense of the word and do not represent true neoplasms [1].

Despite the vast number of cases, studies on odontogenic cysts and tumors are relatively less in the literature and information regarding the demographic profile of these lesions in different populations is scarce. However, the present study was designed to know the relative frequency of odontogenic cysts and tumors and to relate with their clinico-pathological characteristics.

All cases of odontogenic cysts and tumors diagnosed histopathologically between 2014 and 2018 were reviewed from the archives of the Department of Oral and Maxillofacial Pathology. The following variables were recorded: gender, age and location. To classify the location of the cysts and tumors, each jaw was divided into an anterior and a posterior zone. The anterior zone included the incisors, canines and premolars, and the posterior zone consisted of the molars and ramus/tuberosity. Otherwise, it was placed in the zone according to radiographic evaluation. The data was analyzed, and graphs were formulated respectively. 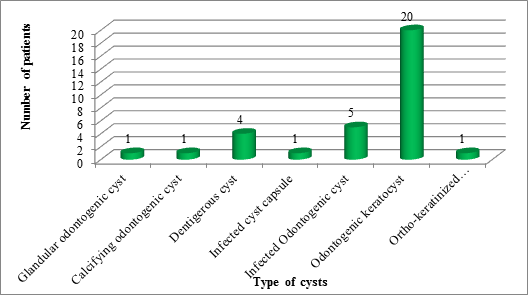 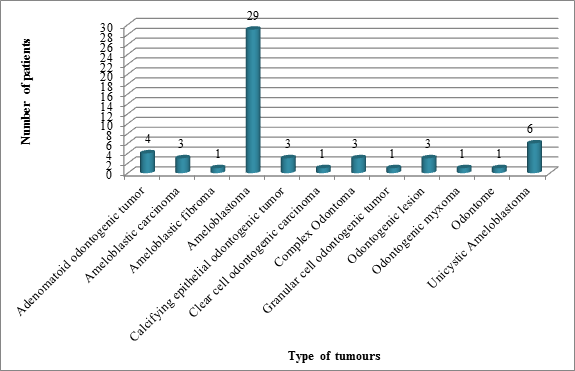 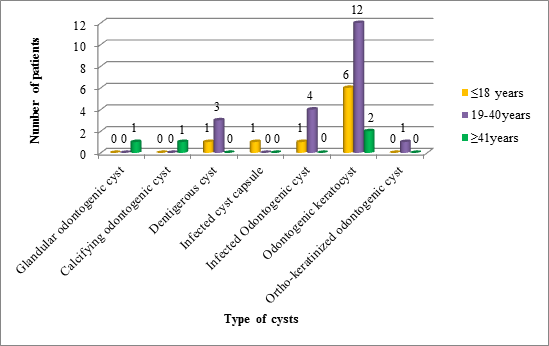 Figure 3: Comparison of the types of cyst according to age

Figure 3 illustrates the comparison of the types of cyst according to age, 12 patients aged 19-40 years, 6 patients in age group of ≤18 years and 2 patients in aged ≥41years presented with Odontogenic keratocyst. However, there was no statistically significant difference among different age groups. 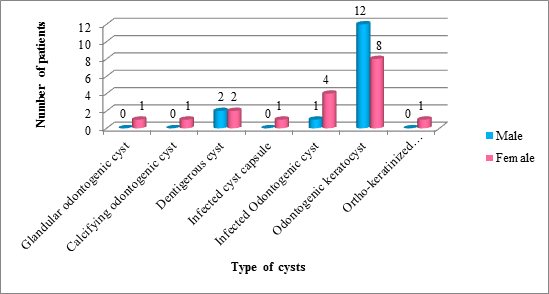 Figure 4: Comparison of the types of cyst according to the gender 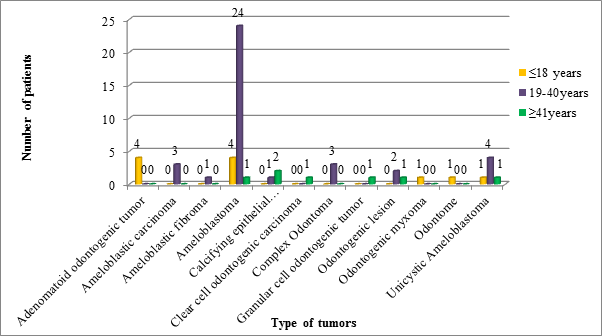 Figure 5: Comparison of the types of tumors according to age

Figure 6: Comparison of the types of tumors according to gender

Figure 7: Presentation of the lesion according to the location

Figure 7 illustrates the presentation of the lesion according to the location. Majority of the patients presented with lesion in the posterior mandible (58.54%) followed by anterior mandible (17.07%).

Table: Distribution of odontogenic cysts and tumors according to prevalence, gender, age and location

Out of the total 893 patients, 3.6% of odontogenic cysts and 6.2% of odontogenic tumors were seen. This was in concordance with studies done by Deepthi et al [9] and Pandiar et al [10]. In the current study, odontogenic cysts were more common in females which is in concordance with a brazilian study [11] and in contrast with Ramachandra et al [12] and Kambalinath et al [13] and odontogenic tumors were also prevalent in females which is in agreement with Ramachandra et al [12] and Rafael et al [14]. Unlike our study, other literatures show a male preponderance [9,10,15,16,17,18]. According to a study done by Varkhede et al [19], males and females are seen to be affected equally. This disparity can be attributed to demographic variation. Mandible is the most frequently affected site, which is contrary with the studies of Ochsenius et al. [7] and de Souza et al [11].

Dentigerous cyst (DC) ranks second amongst all the odontogenic cysts in this study showing mean prevalence of 12.12%. Similar finding was seen by Deepthi et al (17.2%) [9]. However, Kambalimath et al [13] and Ramachandra et al [12] found DC to be the most common odontogenic cyst in their study. The mean prevalence of DC was seen in 2nd to 4th decade, one case was seen in the 1st decade. Our finding was consistent with the study done by Ramachandra et al [12] whereas other studies showed more prevalence in the 1st and 2nd decade [9,13]. Equal predilection of male and female is seen in our literature. This is in contrast with various previous literatures where a male preponderance was seen [9, 12, 13].

Ameloblastoma is found to be the most prevalent odontogenic tumor with the mean prevalence of 51.79%. Many of the studies obtained the same result [9,12,15,17,18,19]. The peak prevalence was seen in 2nd to 4th decade. This is consistent with various other literatures [9,10,12,14,15,17,18,20]. Male and female were affected equally (1.07:1). Contradictory findings were seen in various studies with few studies showing male predominance [10,12,13,16,20] while others showed a female predilection [9,14,15]. The most frequent site reported was posterior mandible which in consistent with many studies [9,10,14,17,18,19,20]. In our series, we have taken a variant unicystic ameloblastoma as a separate entity. It showed a prevalence of 10.71% seen more in 2nd to 4th decade. Males were affected more than females and posterior mandible was the predominant site.

Adenomatoid odontogenic tumor (AOT) is the second most common odontogenic tumor found in our study with a prevalence rate of 7.14%. This was in consensus with a study done by Ramachandra et al [12], which showed a prevalence of 7.8%. Only one study showed a slightly higher prevalence of the lesion [19]. Various other literatures exhibit a lower prevalence rate [9,10,14,16,17,18]. All the cases were seen at a younger age in this study (<18 years of age). Majority of the literature showed a similar finding [9,10,14,17,18,19,20]. However, Ramachandra et al found a bimodal age distribution [12]. On the other hand, Rubini et al found AOT more common in the 3rd decade [16]. A female preponderance was found which was consistent with [10,18,14,20]. Equal gender distribution was seen in many studies [9,12,16,19] except for Nalabou et al [17] which showed a higher prevalence in males.

Odontoma showed a prevalence rate of 5.36%, which was contradictory to various studies where odontoma showed a higher prevalence rate [9, 10, 12, 14, 15, 18, 19]. Over- or under-reporting has a direct influence on this phenomenon. Most odontomas are discovered on routine radiographs and do not produce clinical symptoms [21]. This may be responsible for the low incidence of odontomas observed in the Indian population, because most patients in our environment do not seek medical consultation unless there are symptoms suggesting an obvious pathology [19]. Odontoma was more commonly seen in 2nd to 4th decade with a definite male predilection.

Calcifying Epithelial Odontogenic Tumor, similar to odontoma, showed a prevalence of 5.36%. It was more commonly seen in 4th to 5th decade affecting the female population more than its counterpart. Ameloblastic Carcinoma also showed a prevalence of 5.36% in our study affecting the middle-aged group (19-40 years of age). All the cases were seen in females. Other studies have shown 3.74% [18], 1.1% [9] and 0.3% [13,14] prevalence rates. All these studies showed the mean age prevalence in 3rd to 6th decade. Majority of the literature showed a male predominance [9,16,18] except Rafael et al [14] which was similar to our finding.

Dr. Fahad M Samadi envisioned the idea of the current research, Dr. Jaya Singh developed the matter, and prepared the manuscript. Dr. Shruti Singh and Professor Shaleen Chandra reviewed the manuscript. All the authors discussed the conclusion and contributions to the final manuscript.

All authors have read the journal’s policy on disclosure of potential conflicts of interest and have none to declare.

The article was self-funded.